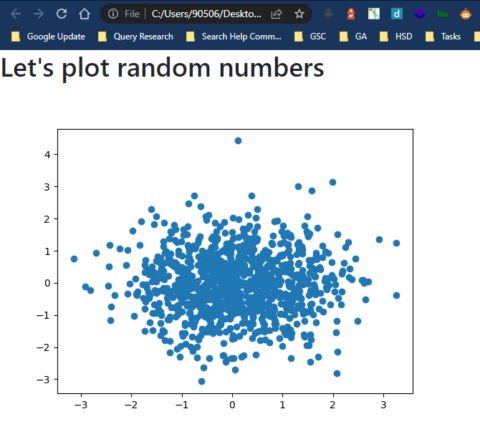 Since JavaScript is the main programming language for making a web browser work, and a web page interactive, Python is usually used for data science, machine learning, and artificial intelligence.

Even if we have back-end infrastructures like Django, and Flask, or static-site-generators like Jekyll, Python is usually behind JavaScript for web development.

But thanks to the latest improvements, JavaScript’s future is open to discussion. “PyScript” allows Python Scripts to work easily within web components.

“PyScript is a framework that allows users to create rich Python applications in the browser using HTML’s interface and the power of Pyodide, WASM, and modern web technologies. The PyScript framework provides users at every experience level with access to an expressive, easy-to-learn programming language with countless applications.

In this column, you’ll learn what PyScript is, see an example, learn about alternatives, and also find how to create a custom web app with Python and PyScript.

What Is The JavaScript To Python Migration?

Python is a human-readable programming language.

Thus, there are many Python intermediary program languages to help JavaScript and Java modules and packages are being used in the Python environment.

For example, “TensorFlow” is mainly a JS Package, or Plotly and Selenium.

There are even special packages to make JavaScript code turn into Python code, such as Js2Py.

Why is understanding JavaScript behind Python important?

Because using Python Scripts inside the web browser doesn’t mean that the age of JavaScript is ending for web development.

JavaScript is still functioning behind the Python Scripts in the web browser.

What Is PyScript & How Can You Use It For Creating Web Applications?

PyScript is a framework for making web browsers use Python Scripts.

To use PyScript inside a web browser, follow these steps.

Use the stylesheet and JavaScript in the area of the HTML File.

An Example Of Running Python Script Inside Of Web Browser

An example of running a Python script in the browser is below.

The area of the HTML File represents the most important resources.

We also used the “” web component to make the Python modules to be imported.

In this example, we have imported the “numpy” and “matplotlib.”

In the “” section, we will use these modules to create a Python Line Plot inside a web browser.

It is necessary for making the Python script’s output insertion.

The Python Script above is a simple line plot script. And you can see the result below. The example above shows how to create a line plot with the help of PyScript.

How To See The Terminal Output Of The PyScript

For every Python Script, there is always a terminal that works and outputs the messages from the computation process. The browser console should be read and followed by the developer to see how the PyScript works and what happens behind the scenes.

For example, the screenshot above shows the running process of the Python script that we have created.

It explains how the “numpy”, or “matplotlib” and their dependencies are loaded, and used by which resource.

How To Create a Custom Web App With Python And PyScript?

To create a custom Web App with Python and PyScript, follow these steps:

An example of a Custom Python Web App for “random password generation” based on the given password length is below.

The screenshot above demonstrates an example of PyScript in an HTML Document to generate custom passwords.

The Python script that I used is below.

And, the live version of the custom Python Web App is here.

Just write a numeric value into the input area.

And, it will give you a simple 45-character password.

You can use this technology for some of my other SEJ Articles for auditing sitemaps, or visualization of hot topics from news websites.

Or, in the future, we can demonstrate more sophisticated web apps via PyScript.

What Are The Disadvantages Of PyScript?

The main disadvantage of PyScript is the lack of support.

PyScript is announced during Pycon 2022 to Python developers.

It was a big and exciting event, but community expectations were higher than the current state of PyScript.

Due to weak community support, PyScript development might be slower in the future, but when we think of the journey of Python, it is not surprising.

Python wasn’t that popular until the last five years, because it wasn’t known. Above, you can see how Python suppressed the search demand of JavaScript overall.

The main reason for Python’s popularity growth is the “pandas” library.

That’s why, ML and Data Science are the main focuses of Python, but it doesn’t have to continue in that way.

Thus, PyScript should be taken into serious consideration for the future of web development.

What Are The Alternatives To PyScript?

Alternatives to PyScript are not equivalent to PyScript since it directly runs on the browser, but still, there are different methods to use Python scripts inside a website indirectly.

Some alternatives to PyScript are for Firebase such as Appwrite, and some other work for Web Development such as Brython.

Brython is older than Pyscript, and it focuses on making Python the primary language for web development with “text/python” file type instead of “text/javascript”.

Can PyScript And Brython Affect Search Engines And SEO?

Yes, in the future, PyScript and Brython can increase their effect on the web development industry.

If a search engine starts to see “text/python” files, or “.py” scripts in the HTML source code, it should be able to make it work to see the web page as is.

At the moment, PyScript works via JavaScript, and Brython is already at the beginning of its journey despite its being older.

Thus, in the future, Google, as a heavily Python-coded search engine, might need to render Python files for crawling and rendering web pages.

Conclusion For Python As Web Scripting

For people who love coding, it doesn’t matter whether you use Python or JavaScript for a certain task.

But, Python is the easiest programming language to learn as human-readable, it gives more functionality with fewer characters.

Most data scientists and ML (machine learning) Engineers know Python in a good way, and transferring their talents into web development would be similar to the unification of two different universes.

Genuine Enthusiasm As A Success Factor