Disrupting The ‘Capability Perception’ For Women At Work 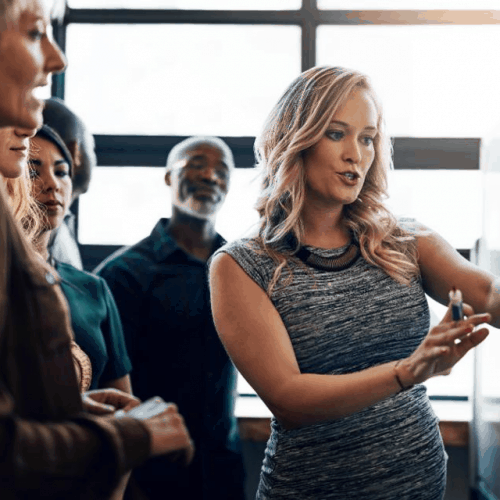 The “capability perception” is used by experts to analyze the potential for success among both individuals and organizations. Researchers look at the skills and knowledge of individuals and/or employees that make up a company to predict performance. According to the
Global Entrepreneurship Monitor Report (GEM)
, the gender gap remains persistent. Even in today’s world, where we’ve come so far, the capability perception for men in business ages 18 to 64 is
61%—65% and only 46%—50% for women. I think we can agree, this should be more of a 50/50 split.

Taking a closer look, we’ve got work to do, and it starts with our own day-to-day language, engagement and how we communicate at large — things we can fix. Over time, we’ve coined terms like “female leadership” and “women in power” to empower women, and with good intentions. But the reality is, it’s time to call women in such roles what they are: leaders. Period. Removing the gender distinction is a responsibility that should not be taken lightly. It is incumbent upon us to lift each other up, build trust, and cultivate equal-opportunity environments to excel. First, we need to align on the procedure.

A proven method for rapid change is disruption. It’s logical, easy to follow and often leads to fast-acting results. We need to clearly define the challenges, lack of supply, systemic errors and create an entirely new solution to implement.

It’s not something we want to believe, but the truth is, women are currently earning less. Why? If you’re a woman who’s been in business for 15, 20, even 30-plus years, way back to the Mad Men days, it’s likely the case that you’re a glass-ceiling-breaker like me (I’m clapping for you, because we did it!). This means, though, that you’re not a stranger to the way things were. Years ago, it was the case that an identical counterpart with the same experience, skills and capability would have likely been hired for the position you applied for. You may have been hired, too — but perhaps as a secretary, and with less pay. Over time, as business and society shifted (thankfully), you were likely promoted, granted a raise, and slowly caught up. However, the lag in earnings and title left a gap that was never filled. For millions of women, this is an irrevocable hole that still exists. The difficulty has been in breaking the pattern that has been etched into the socioeconomic stars. The good news: we are learning from such gross errors today.

It is our duty, now and in the future, to ensure that our hiring practices are based on skill, where gender, race, religion or creed is completely absent from bias — always. This, combined with relentless and, of course, respectful and worthy requests for higher pay, can ensure we get to the point of true pay equality. Don’t be afraid to ask for what you feel you’re worth!

For centuries, women faced an “inventory shortage” of men who actualized equality in the workforce. And while the quantity has undoubtedly grown, the truth is, we remain short on the quota. The lack of supply leads to unnecessary efforts though. Men and women in the workplace believing in and earning equal pay should simply be equal. Instead, we spend significant time making our case and proving our worth. The irony is, the worth already exists.

Collectively, we’ve proliferated an air-tight subject that was once swept under a dusted rug beneath a 100-year-old mahogany desk — as if a woman on a morning run, wearing high-heels, popped into an archaic office, spun the chair around and started getting things done.

“Work-life balance” has become one of society’s favorite buzzwords, yet we continue to struggle with the true meaning until we actualize it. In our always-on, highly technological world, there’s very little downtime and we’re facing serious download issues on how to “auto-correct” this. Working mothers especially continue to grapple with the fallacy of “having it all” or trying to balance the proverbial work-life scales of justice: Take my kids to school, get a moment of “quality time,” and show up late to the meeting? Or hire a babysitter and get the promotion? This isn’t just a challenge; it’s a virus without an antidote.

What Is The Answer?

First, we must dismantle the theory that women aren’t as capable as men and continue being rockstars. Show return on investment at every touch point, walk the walk, make an irrefutable case that capability is equal, and work for an employer that’s onboard in supporting you from the get-go.

Second, as an employer, make workplace equality a priority if you haven’t already done so — from culture to salaries to titles and opportunity — for women and all parties. We all need to unite; anything less is unacceptable.

And third, employees and employers must authenticate work-life balance. Ask for it, show it, be it. You can have your cake and eat it, too. Employers, offer remote work opportunities and flexibility on paid time off. Typically, happy employees equal greater productivity and satisfaction.

We are in a better place than we were 30 years ago, 10 years ago, and even yesterday. The digital age of heightened visibility creates forums for us to come together, support each other and advocate. If we don’t join forces, it could be another 30 years before we make any more strides. Not sure about you, but as a business leader and mom of three, I simply don’t have time for that.

Why Purpose Matters: The Neuroscience Of Marketing